As I mentioned in a previous post, the impetus for our road trip to the Fife coast in Scotland, via the Lake District, was that our friends, Ant and Charlotte, bought a bed and breakfast in the seaside town of Leven. I know what you're thinking - they must be really great friends to convince me to travel any closer to the Arctic Circle.

Yes, they are really lovely people, but it wasn't just that. Curiosity got the better of me. I could not understand why two globe-trotting, Michelin-starred restaurant-obsessed foodies would put their lovely Midlands home up for rent to take on the sprawling Forth Bay Guest House, which was in need of resuscitation. When Charlotte insisted that we come for a visit to see the place - and bring the dogs - how could I say no?

So, after waking to a drizzly third day in the Lake District, we packed up the dogs and plotted an unconventional four-hour course from Kirkby Lonsdale to Leven, via a lunch break in the lovely Scottish Borders town of Peebles. Yes, sticking to the motorway would have got us to Leven more quickly, but then we would have missed out on the majestic scenery of the Scottish Borders - it's definitely worth stopping here for a night or two, especially if you happen to be outdoorsy. Peebles is about as ancient a city as you can get in this part of the world. It's been recognized as a Royal Burgh since 1152 and was an important market town before that. It is situated on the River Tweed, apparently brimming with salmon and attracting avid fisherman from far and wide. Parking in the town is plentiful, and, for some strange reason, is free every day except Saturday, when the Edinburgh Road car park charges 20p for two hours. For real - it's some kind of mythical UK town that doesn't shun cars. 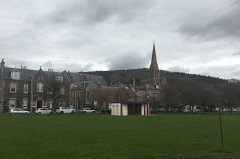 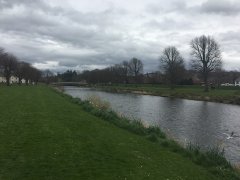 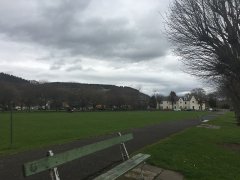 After taking the dogs on a walk around town and along the riverside, we were ready for lunch. I had looked up a few places en route and most describe themselves as dog friendly. We settled on the Tontine Hotel, who cheerfully welcome dogs in their bar area. We were a little later than the normal lunch crowd, which was great. We commandeered a corner booth and settled in for what turned out to be a very tasty lunch. My other half went for the ham hock mac & cheese, while I chose the minced lamb in filo with mint sauce and a pomegranate couscous salad. Both meals really hit the spot! Emma slept next to me and missed the whole experience.

After lunch, we were Leven bound to check out this crazy bed and breakfast venture. The town is about 35 miles north of Edinburgh and 20 miles south of St. Andrews. This whole area is crawling with serious golfers keen to test their skills at the numerous well-known courses in the area. A highly respected course, Leven Links, is right next door to Forth Bay Guest House. Now it all made sense - both Charlotte and Ant love golf and Ant had recently sold his interest in a golf club that he had run for 20-something years. Making a go of a guest house that caters to golfers would be a new challenge for them both - but at the same time, it would be completely within their comfort zone. Upon arriving and taking in the spectacular view of Forth Bay that they see out of their front window every day, we were greeted by their newest family member, a rescue dog named Murphy. The bed and breakfast is dog friendly, so they obviously needed a dog. We immediately set off for a walk along the vast beach, with four happy dogs. Murphy absolutely hit the lottery when he was picked by Ant and Charlotte - he gets to do this walk several times a day and he loves it! 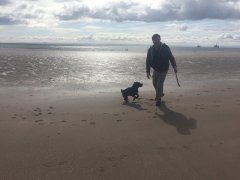 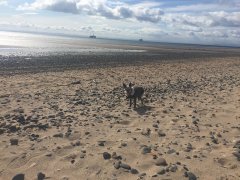 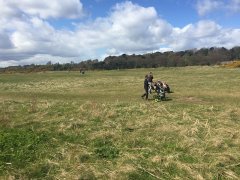 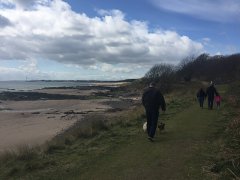 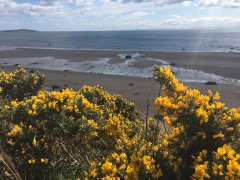 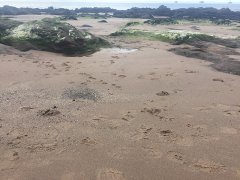 Our beach walk took us along the Fife Coastal Path to the town of Lower Largo, where pints were waiting for us all at the local pub. The town's claim to fame is that it was the inspiration for Daniel Defoe's novel, Robinson Crusoe, based on the life of Lower Largo resident Alexander Selkirk. We soaked up the sunshine and watched the dogs play on the beach.

Ant and Charlotte are renovating Forth Bay Guest House one project at a time and it's coming along splendidly. Even though the venture is new and the construction will be feverish to get ahead of the winter weather, they are almost always at capacity. If you're serious about going on some spectacular coastal walks or putting your golfing skills to the test on world-famous courses, then I suggest you book soon. I'm not sure that I'll even be able to get a room this summer!

Amy has lived in the UK since 2010 with her British husband, two American rescue dogs, one English Chihuahua, and one RSPCA kitten who now thinks she's a dog. She's a marketing and communications professional by day but finds time for charity work. Despite the constant movement, she is still usually freezing to death on the iceberg.